Outside Munich there is little for us to find. Johann Friedrich Steinkopf (1737-1825), the animal painter who worked at the court of Württemberg, modeled himself on Philips Wouwerman and Johann Heinrich Roos and later on Paulus Potter, as is fitting for a ‘progressive’ realist. His horse paintings are no masterpieces though [1-3].1

In Augsburg, around 1770, we see a still-life painter Willem Robart at work, whose pictures seem to have got lost, and who is said to have been a pupil of Jan van Huijsum.2 The landscape and animal painter Johann Elias Ridinger (1698-1767) [4] was, as a pupil of Johann Falch (who painted still-lifes in the manner of Marseus van Schrieck), Carl Wilhelm de Hamilton and Georg Philipp Rugendas I, still in contact with Dutch training from the 17th century. During his first time in Augsburg he also copied old masters. His drawn landscapes look like those of the late Dirk Maas and these lively sheets still kept something of Berchem’s poetry [5-7].3 As in the case of Georg Philipp Rugendas I, we cannot explore his activity as an engraver. 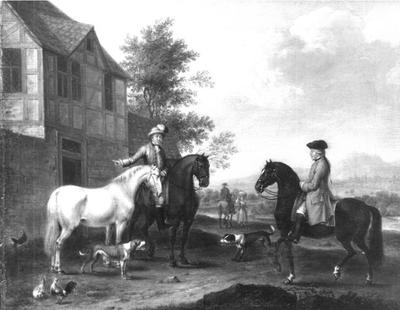 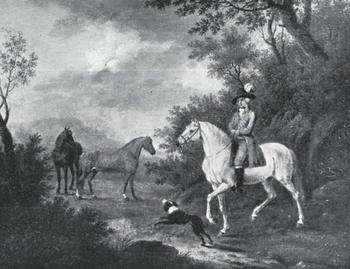 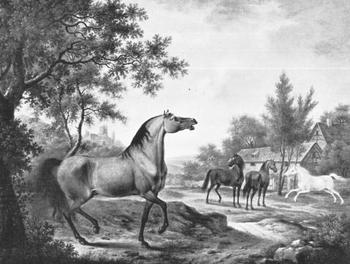 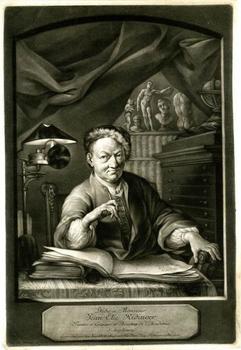 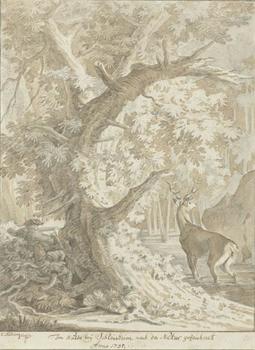 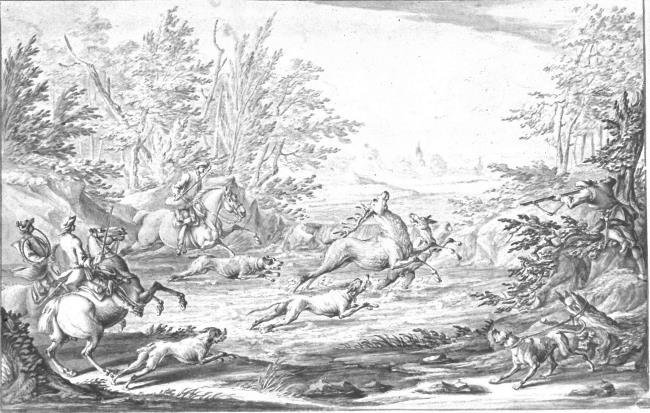 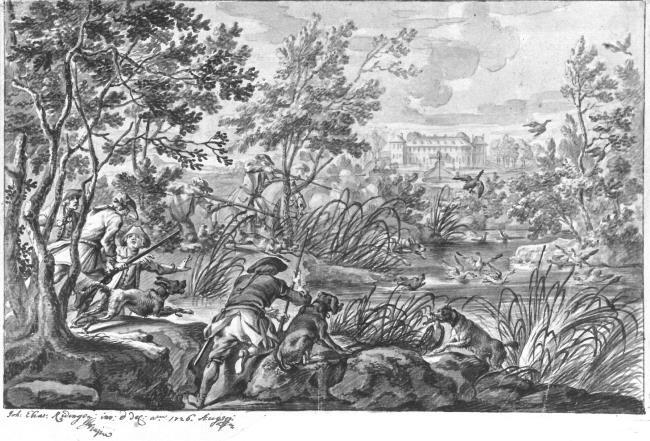 The graphic artists, especially in Southern Germany, indeed play an important role as mediators of Dutch artistic heritage. Consider Johann Gottfried Haid (1710/14-1776)4 and Johann Elias Haid (1739-1809) [8], the Hertel family of engravers from Augsburg, of whom the young Johann Georg Hertel exclusively worked after Rembrandt and Schalcken [9-10],5 and Elias Baeck (1679-1747/1756), who etched after Berchem’s compositions [11-12].6 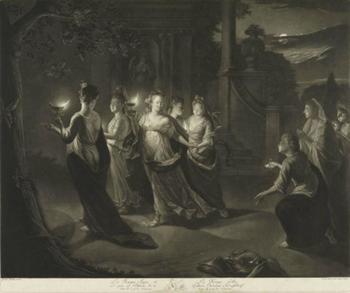 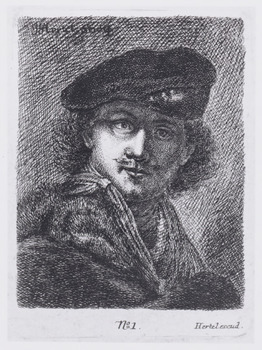 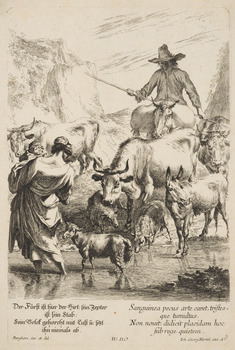 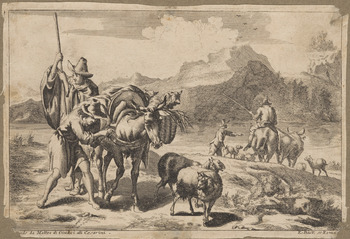 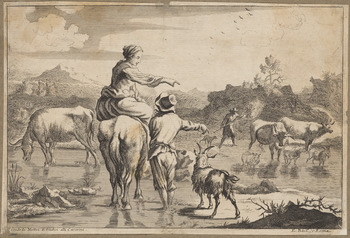 The Southern German baroque painters, i.e. the painters of churches and altars, do not look principally to the North (and when they do, particularly to Rubens), but to Italy. Sometimes the ‘colourful liveliness’ in the paintings is muted by an imitation of Rembrandt’s chiaroscuro, as was noticed in the work of Johann Evangelist Holzer (1709-1740) [13-17].7 All the same it does seem more likely to me, that in the work of Franz Joseph Spiegler (1691-1756) his chiaroscuro and the ‘Rembrandt-like lighting effects’ are derived from Venice. In Spiegler’s paintings we also come across types and compositional elements, which stem from Giovanni Battista Tiepolo (Solomon and the Queen of Sheba) [18].8 In general the art from Augsburg is Italianate; moreover the path for a regional concept was paved by Johann Heinrich Schönfeld and Johann Heiss.9 No Dutch influence would emanate from Johann Ulrich Mayr, as he had bidden farewell to the Dutch style in his altarpieces. 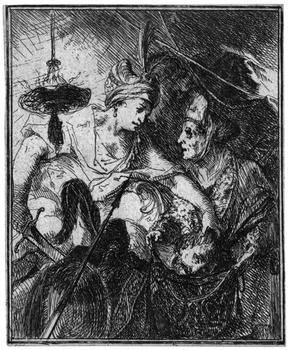 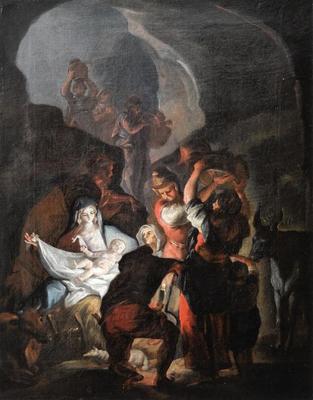 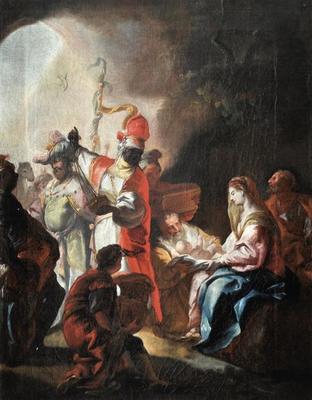 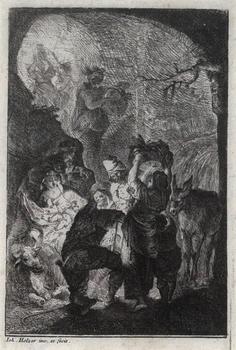 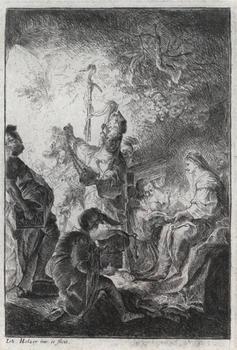 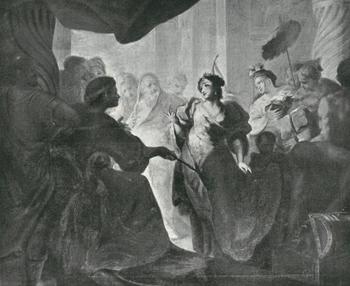 2 [Van Leeuwen 2018] It seems hardly possibly that Willem Robart, is identical to the person who worked in Augsburg in the 1770s. There is a Huijsum-like flower still-life by a R.G. Robart (RKDimages 60710), of whom we have no biographical information.

4 [Van Leeuwen 2018] Johann Gottfried Haid left Augsburg after c. 1750 and worked mainly in Austria and London (several reproductive prints he made in London in RKDimages). His nephew Johann Elias took over the publishing house of his father Johann Jakob in Augsburg after the latter’s death in 1776. Johann Elias had commissions throughout Germany, such as the engraving works in the Düsseldorf Gallery in 1782.

5 [Van Leeuwen 2018] Johann Georg II (not Gottfried, as Gerson stated) did work after many Dutch, Flemish and German masters.

6 [Van Leeuwen 2018] Several prints by the Augsburg printmaker Elias Baeck after or in the manner of Nicolaes Berchem originated in Rome c. 1700-1710, where they were published by Matteo Giudici alli Cesarini.

7 [Gerson 1942/1983] Feulner 1913, p. 746; Feulner 1929, p. 180-181. [Van Leeuwen 2018] Feulner refers to colourful designs in oils for two prints, The Adoration of the Kings and The Adoration of the Shepherds (Augsburg, collection Röhrer), which, in old sources, were considered to have been painted ‘in the taste of Rembrandt’. However, the paintings actually were copies after the prints (Braun/Wiercinski 2010, p. 296, ill.), just like two paintings which were auctioned on 2 April 2017 by Dorotheum, Vienna, nos. 22-23, as school of Johann Evangelist Holzer. It is clear that Holzer only took (the etchings of) Rembrandt as an example in his etchings.