The art of the Frankfurt still-life painters Abraham Mignon and Jacob Marrel didn’t die out with the 17th century. One of the first in this field to pick up the tradition of the older Frankfurt masters, and therefore of the old Dutch masters, was the Saftleven adept Christian Georg Schütz I (1718-1791). His flower paintings are usually worth looking at.1

Justus Juncker (1703-1767), who was almost the same age, was a master in this subject. Again it was the collection of Heinrich Jakob baron von Häckel, that brought him into contact with Dutch paintings. In the beginning Juncker preferred to copy the interior scenes of Thomas Wijck and related masters (etching after Wijck of 1749).2 He painted a series of kitchen scenes in the taste of Cornelis Saftleven, Adriaen van Ostade and Thomas Wyck [1-4].3

The still-life element in them gradually took on greater importance, until he at last devoted himself exclusively to still-life and flower painting. They are neat works in the manner of Jan Davidsz de Heem and of Jan van Huijsum [5-8]. From the few words, with which Goethe characterized his art, we feel how Dutch his creations were perceived: ‘Juncker, who very cleanly executed flower- and fruit pieces, still-lifes and quietly occupied people after the manner of the Dutch masters’. 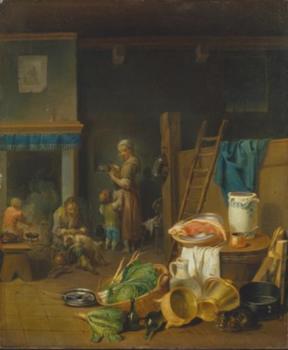 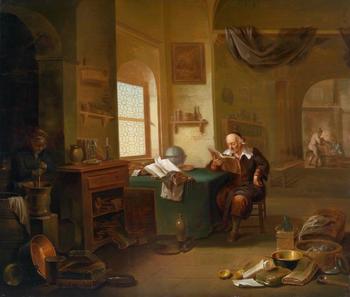 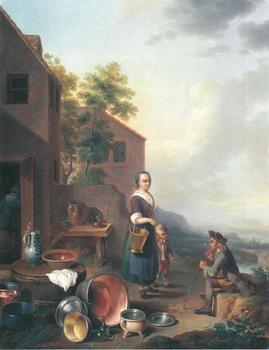 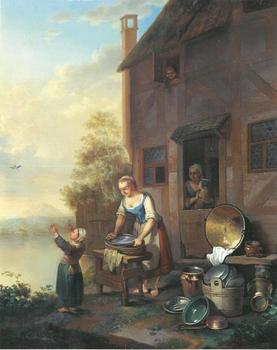 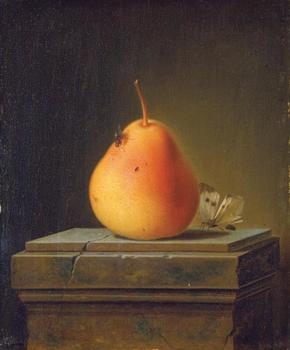 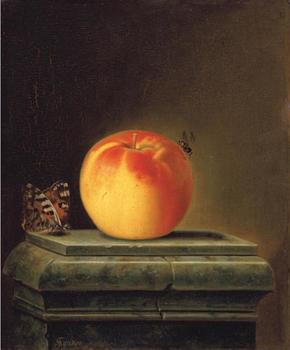 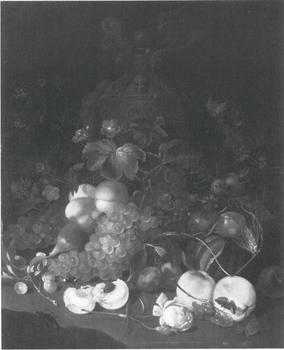 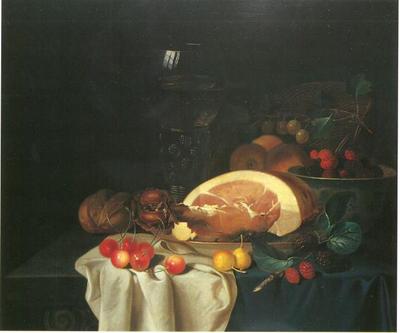 His pupil and son-in-law Johann Daniel Bager (1734-1815) was rightly praised, as his still-lifes of the 1780s would have done full justice to a Willem van Aelst and Abraham Mignon [9-11]. His portraits are not in the way of the old masters and his depictions of interiors, especially the rendering of the painting cabinet of the Frankfurt collector Gogel II, are constructed according to Flemish prescriptions [12].4 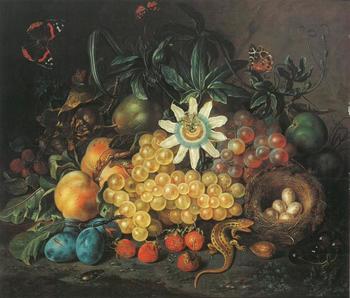 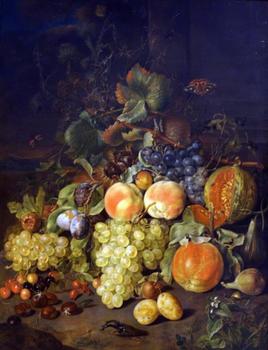 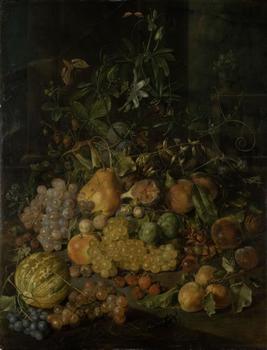 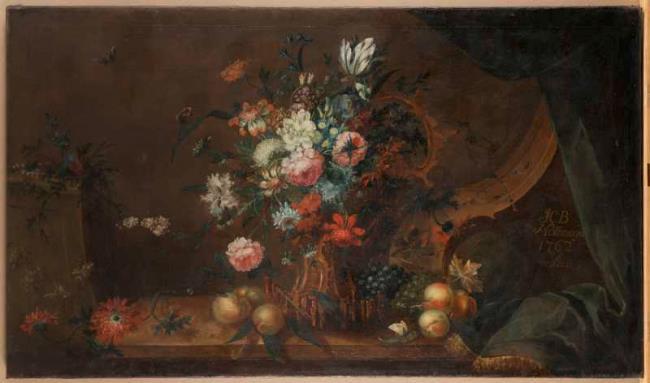 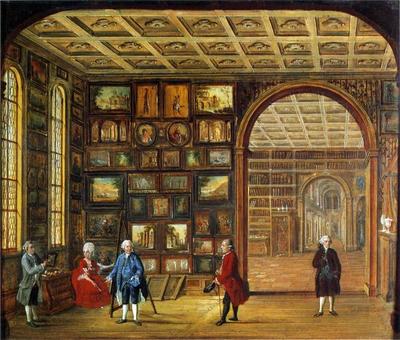 A brother of Johann Andreas Benjamin Nothnagel, Johann Christian Benjamin Nothnagel (1734-?), is lauded by Von Gwinner as a flower painter [13].5 The amateur and collector Andreas Joseph Chandelle (1743-1820) copied his own picture collection in pastel [14-17];6 especially highlighted are his copies of dead rooster and hares by Abraham Mignon and Jan Weenix ‘with […] the many grains in the wood’, in other words the rendition of a trompe-l’oeil painting.7 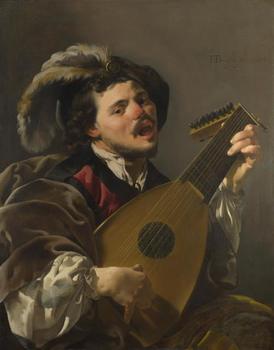 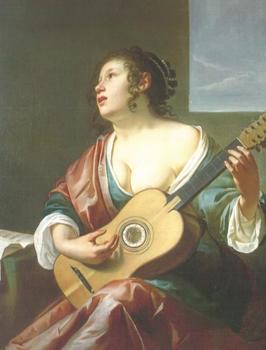 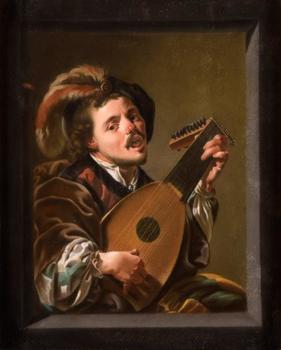 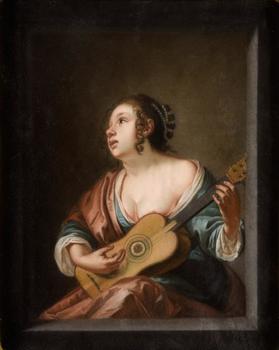 A speciality for Frankfurt were the depictions of church interiors. Johann Ludwig Ernst Morgenstern (1738-1819),8 a pupil of Christian Georg Schütz and Johann Andreas Benjamin Nothnagel, excelled in this. He also visited the academy of Salzdahlum and worked in Hamburg and Darmstadt. He must have studied Dutch art everywhere, as he exclusively painted church interiors in the style of the Neeffs and the Steenwijcks, who had been in Frankfurt. Usually they are fantasy buildings [18-19], but sometimes he also strictly followed the example of the churches of Frankfurt [20-24].9 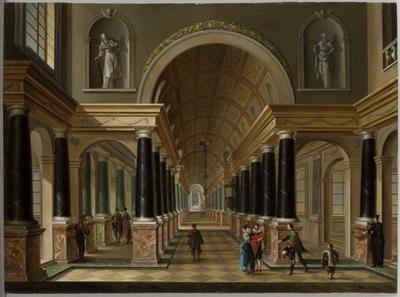 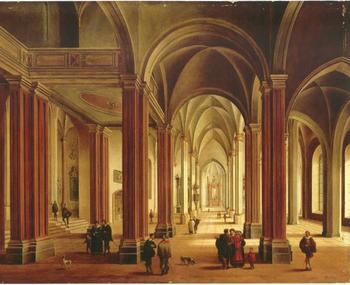 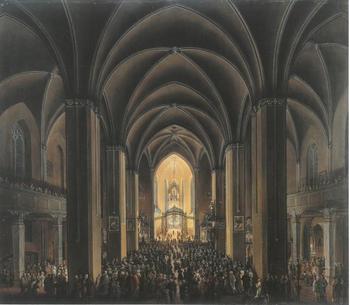 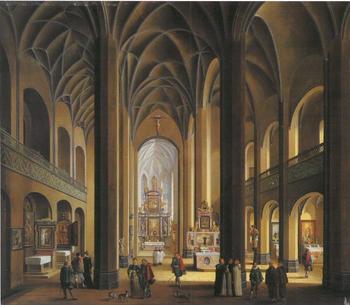 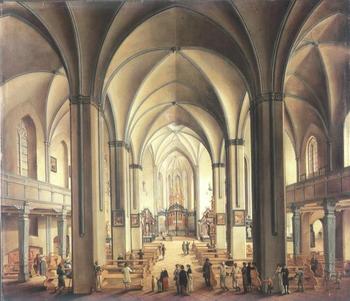 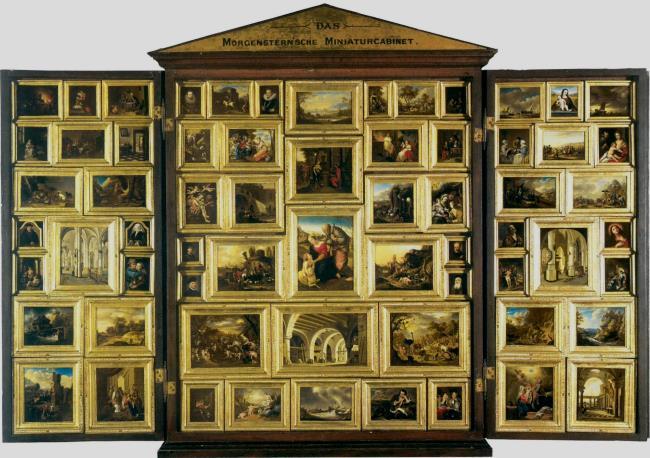 23
Johann Ludwig Ernst Morgenstern and Johann Friedrich Morgenstern
Morgenstern'sches Miniaturcabinet I with 65 miniatures after original paintings, 1803-1843
panel, oil paint 96 x 138 cm
several : Each miniature copy is signed, dated and inscribed with the name of the painter of the original and with the dimensions of the original.
Frankfurt am Main, Historisches Museum Frankfurt, inv./cat.nr. B 81:12 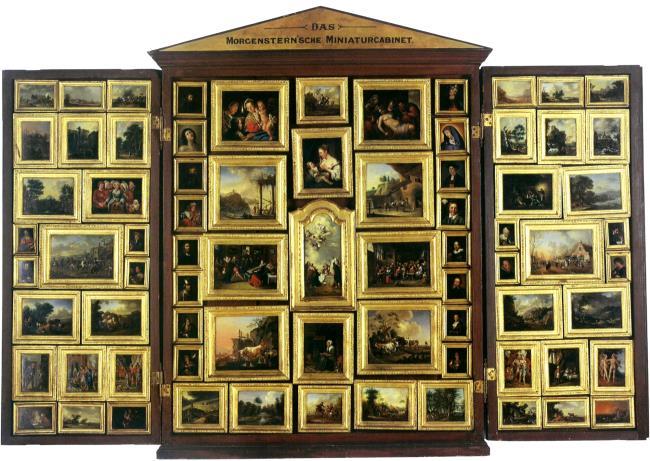 24
Johann Ludwig Ernst Morgenstern and Johann Friedrich Morgenstern and Carl Morgenstern
Morgenstern'sches Miniaturcabinet II with 75 miniatures after original paintings, 1796-1830
panel, oil paint 96 x 138 cm
several : Each miniature copy is signed, dated and inscribed with the name of the painter of the original and with the dimensions of the original.
Frankfurt am Main, Frankfurter Goethe-Haus mit Goethe-Museum, inv./cat.nr. IV-1980-4

Morgenstern was a restorer of paintings, which gave him the idea to copy his own works on a small scale and to put these tiny versions in three cupboards, after the example of the Prehn cabinet. His son Johann Friedrich Morgenstern (1777-1844) added a further 48 copies and his grandson Karl yet another, so that the Cabinet, when it was sold in 1857 to England, contained around 200 copies, half of which are after Dutch paintings. In Gwinner all the names are listed, which gives us an overview of the kind of Dutch paintings in the Frankfurt collections of the time: the minor masters of landscape and genre prevail.10

The Swiss Christian Stöcklin I (1741-1795) settled in 1764 in Frankfurt and painted imaginary church interiors in a similar style [25-27]. It is said, that that he learned architectural painting in Italy with Antonio Galli di Bibiena, but his church paintings from Frankfurt are no less Netherlandish than those of Morgenstern, who occasionally provided his works with staffage figures. A younger Friedrich Stöcklin (1770-1828) cultivated this genre somewhat less schematically even in a later era [28-29]. 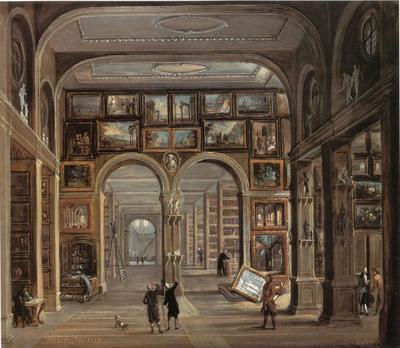 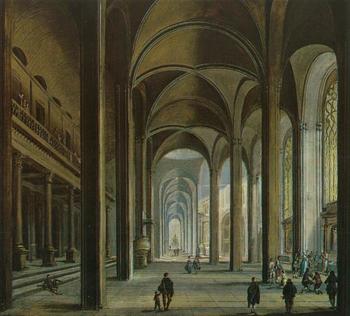 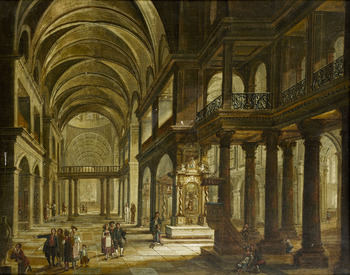 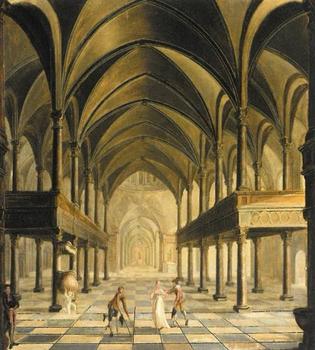 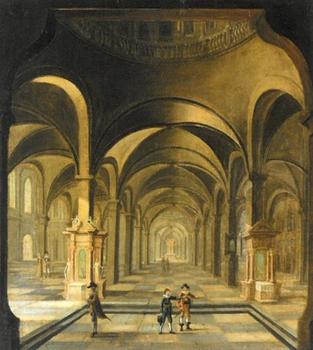 1 [Van Leeuwen 2018] We could not trace flower still-lifes by Schütz, except from some overdoor pieces in the Summer Palace in Greiz, attributed to his workshop (images in the Bildindex).

2 [Van Leeuwen 2018] We could not retrieve the etching, also mentioned in Thieme/Becker 1907-1950: ‘Gelehrter an seinem Pult’, of 1749. There are several paintings of the subject (e.g. RKDimages 61048, 254454, 262733, 262735, 266020, 290942), as well as a drawing (RKDimages 290940). Heraeus quite rightly states that it is only the subject in general that links Juncker to Thomas Wijck. Unlike Juncker's quiet study rooms, Wijck's interiors are overstuffed with accessories, and convey in their chaos a different, negatively charged meaning of alchemy and scholarship. Rather, Juncker's ‘scholar’ usually points to the knowledge of scholarly representations and interior scenes by Johannes Vermeer and Gerard Dou (Heraeus 2003, p. 95-96).

3 [Gerson 1942/1983] Among the landscape painters there were also masters of the interior scenes (Franz Roos, J.A. Herrlein a.o.).

6 [Van Leeuwen 2018] Chandelle made 112 copies in pastel after paintings in his own collection, which were auctioned in June 1843 (Hohm 2016; Jeffares 2006/2018). Among them were these paintings by Hendrick ter Brugghen and Johannes Jansz. Bronckhorst (not Jan Gerritz van Bronckhorst). The provenance of the Chandelle collection of these paintings has not been published before. It is clear that the Ter Brugghen from the National Gallery was with Chandelle, and not one of the other versions, as Chandelle’s copy shows light colored cords, whereas the cords in the other versions are dark. The painting by Johannes Jansz. Bronckhorst served as its counterpart; Chandelle had them framed equally. In order to fit them together better, Chandelle (or a previous owner) overpainted the window in the background. The overpaint was removed by art dealer Rafael Valls in 1992, who sold the work as a Jan Gerritz van Bronckhorst.