In Dietrich landscape, genre and portrait painting come together, if we allow his studies after old men to figure as portraits. The painter of saints Gabriel Donath (1684?-1760) painted church paintings after Flemish-Dutch recipe [1-2], a variety that was much loved in Frankfurt am Main. 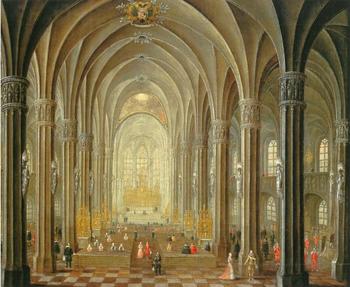 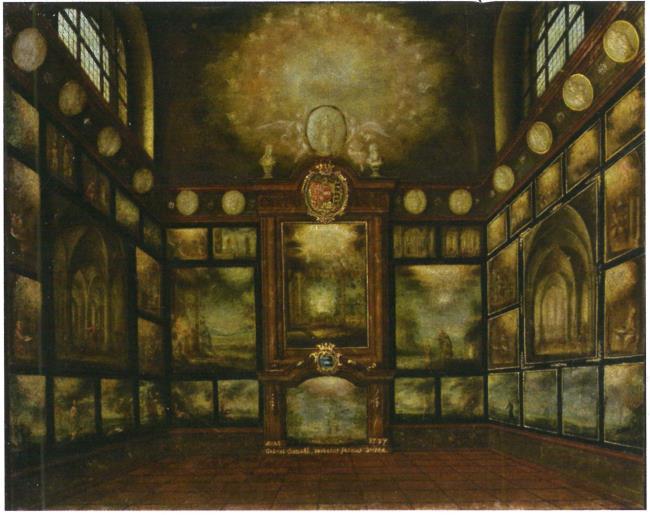 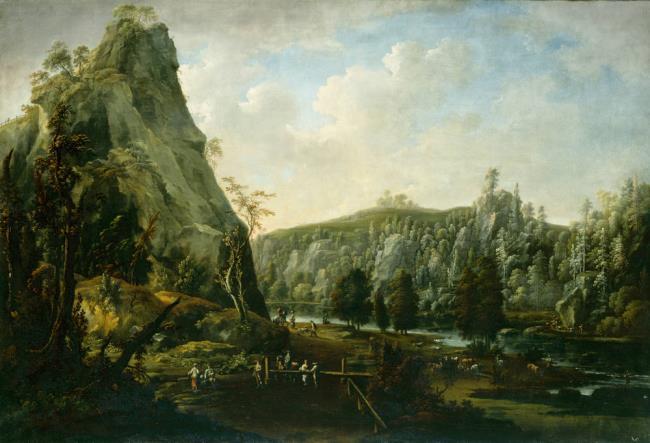 When we look at the professional landscapists separately, we first have to devote some words to Alexander Thiele (1685-1752).1 Thiele was a pupil of Adám Mányoki, but he was mainly formed as a landscapist by Christoph Ludwig Agricola and can artistically best be compared with Franz de Paula Ferg (1689-1740), who also stayed in Dresden for a short while. Thiele was accustomed to see nature with 17th-century eyes and his Saxon prospects are embellished in a romantic way and enriched after the examples of Roelant Roghman [3], Allaert van Everdingen [4], Aert van der Neer [5], Herman Saftleven [6] , Jan Both and others,2 with whose views he became acquainted in the Dresden Gallery.

Thiele came from Erfurt and had first spent several years as court-painter in Arnstadt; but he also offered other princes the products of his brush, e.g. landscapes ‘in various tastes‘ to the Duke of Mecklenburg. Basically, Thiele preferred the Italianate Dutch landscapists to Jacob van Ruisdael and Meindert Hobbema. This trend, that is the style of Nicolaes Berchem and Jan Both, had gained therefore a certain importance for Saxon landscape painting. 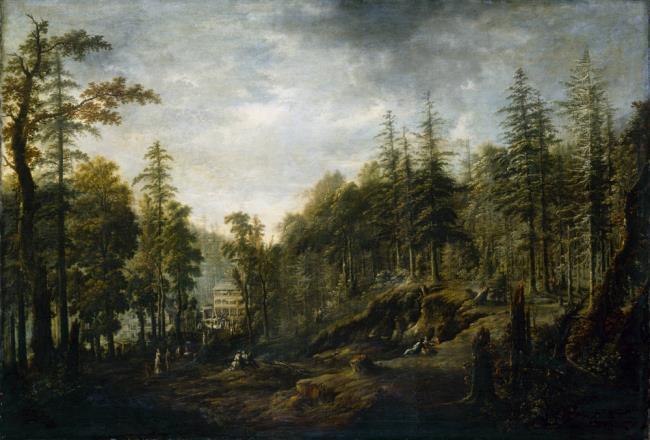 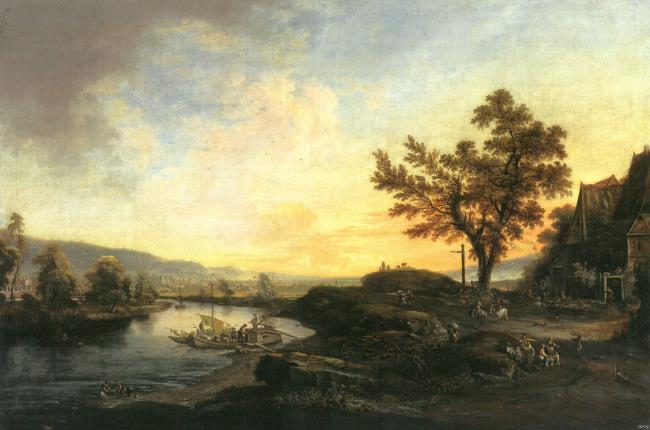 Johann Christian Vollerdt (1708-1769) followed Thiele’s manner, although his work is less topographic and more romantic [7].3 He even used compositions by Jacob van Ruisdael, that he restyled with the help of Herman Saftleven and Jan Both [8-10]. 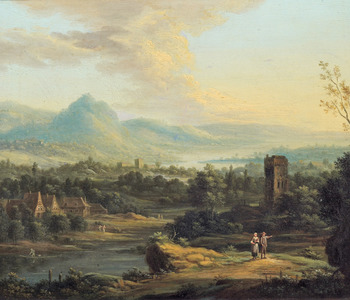 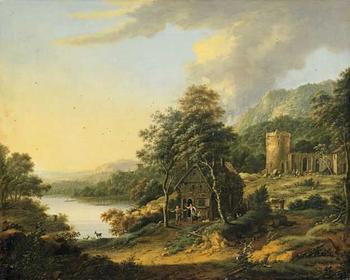 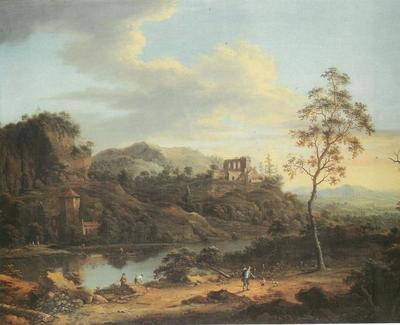 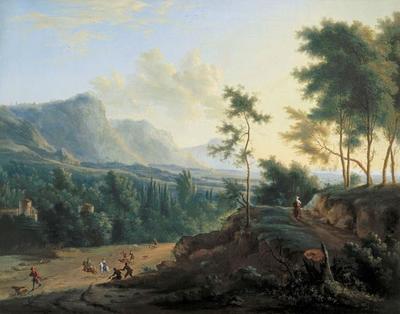 Johann Georg Wagner (1744-1767) drew frequently in the taste of Jan Both and Dietrich, whose pupil he was [11-12]. There also exist animal studies à la Berchem by him [13-14] and compositional drawings in the manner of Adriaen van Ostade [15].4 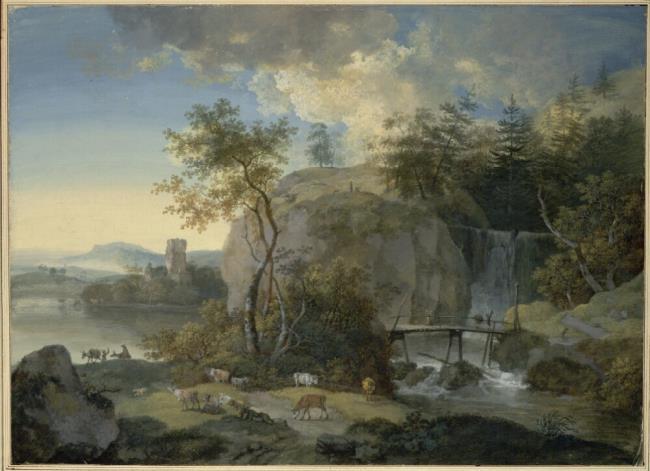 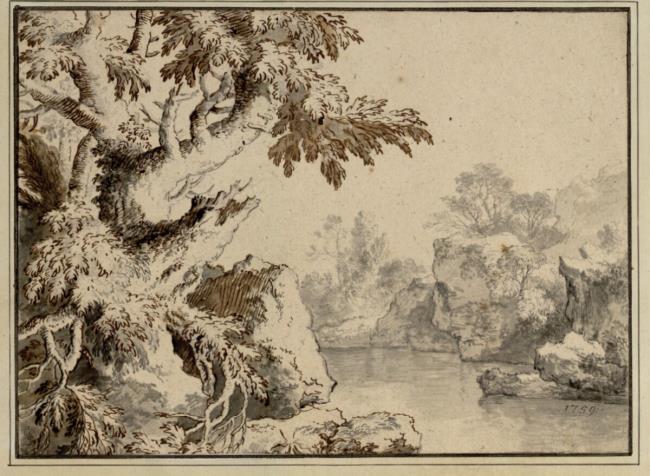 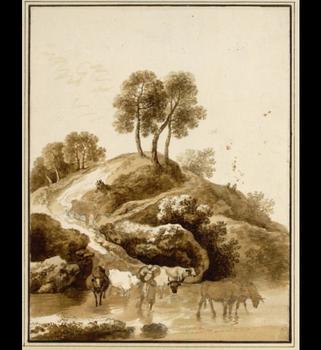 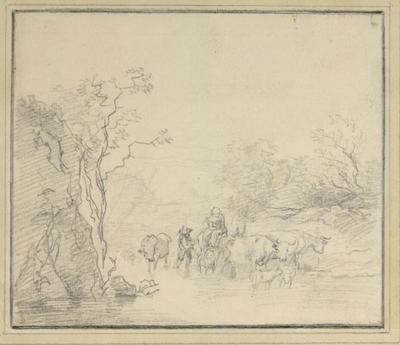 Somewhat more important is Johann Christian Klengel (1751-1824), another pupil of Dietrich, who painted landscapes animated with mythological scenes in the spirit of Cornelis van Poelenburch or Dirk van der Lisse [16-17], river valleys like Jan Griffier and landscapes with animals in the manner of Adriaen van de Velde and Paulus Potter [18-19].5 In contrast with other observers, I detect very little real feeling for nature, to which the time had slowly become receptive. 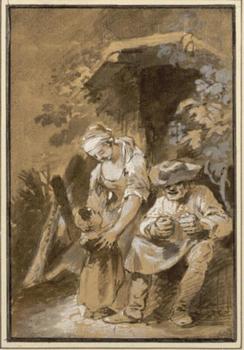 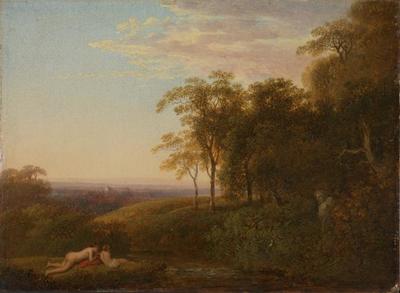 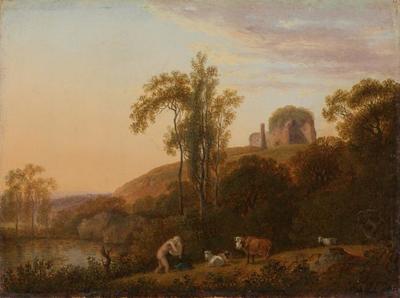 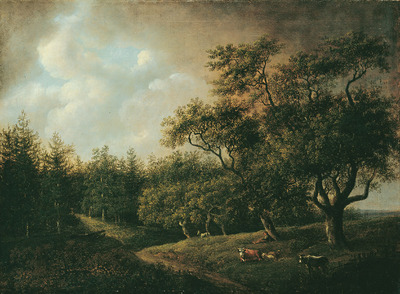 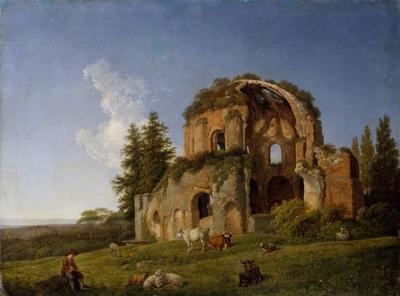 The landscape art of Johann Christian Reinhart (1761-1847) can here only be touched on lightly [21-22].6 In his youth he copied some of Berchem’s paintings in Dresden. Since he had been in Rome, however, his perception of nature widened, and his work -- starting from Claude Lorrain's forms -- took on a classicistic character [20].7 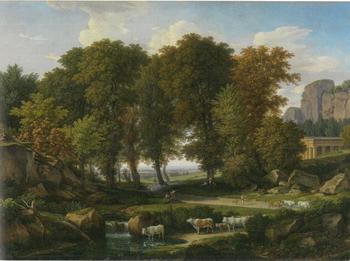 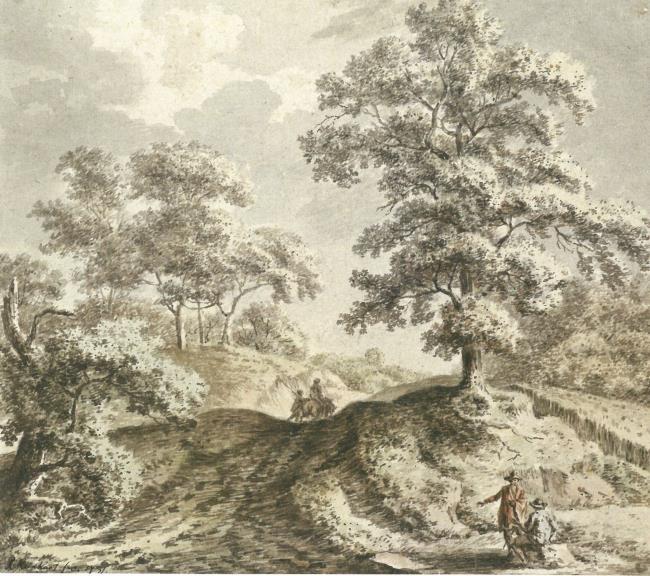 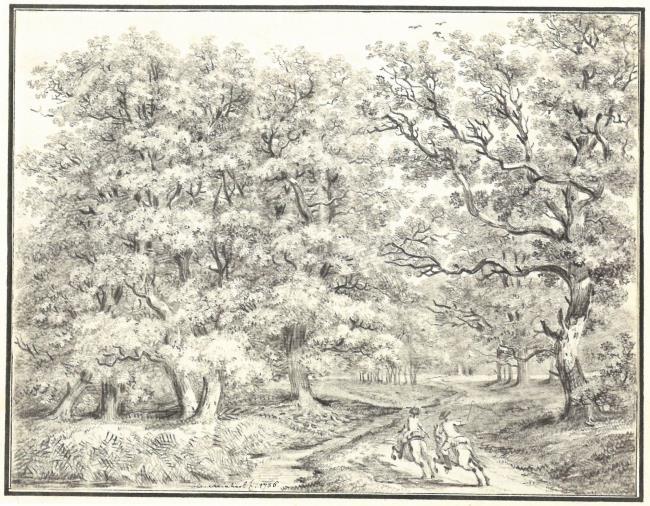 The Norwegian Johann Christian Clausen Dahl (1788-1857), who had worked in Dresden [23] since 1818, copied [24-25] Jacob van Ruisdael’s great and massively constructed paintings [26-28].8 Eventually, he came to a personal and deepened conception of nature. In the meantime, the romantic creations of Caspar David Friedrich had presented the Germans with a sensitive image of landscape, that was in no way connected with the art of the Old Masters. 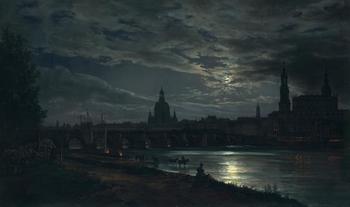 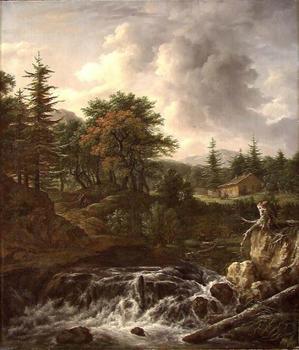 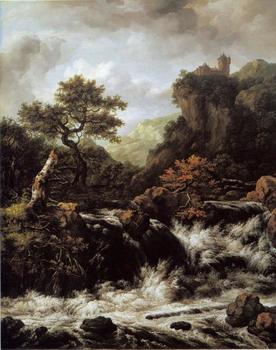 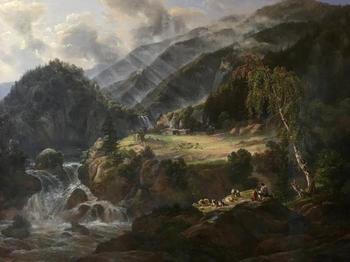 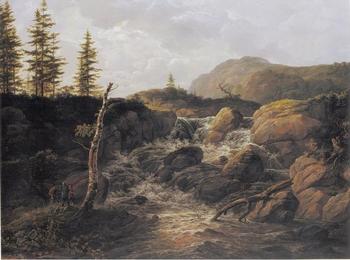 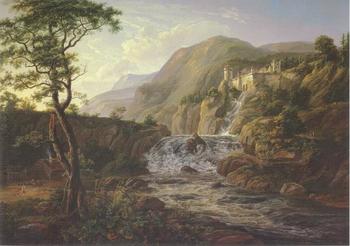 2 [Van Leeuwen 2018] Marx compared this work with Philips Koninck, but remarks that the landscape by Koninck in Dresden cannot have been its model, as that work was acquired as late as 1905 (Marx 2009, p. 337).

3 [Van Leeuwen 2018] The landscape illustrated here, however, is very similar to the (volcanic) landscape around the southern German town of Singen (Hohentwiel) (observed by Jan Kosten, 2010).

7 [Gerson 1942/1983] His early animal drawings are discussed by Preime 1939. In contrast with this author, I do not think that the animal piece is more spontaneous than the landscape, that developed ‘the German strength from the related Dutch school of the 17th century’. The relationships to Berchem are rather obvious. [Van Leeuwen 2018] Obviously Gerson was rubbed the wrong way by the nazi-like language of Preime. However, one could say, that German landscape painting was developed from the study of Dutch landscape painting. Reinhart clearly studied Dutch landscapists when he worked in Leipzig and Dresden (1778-1789), i.e. Anthonie Waterloo, whom he copied. I don’t see much connection to Berchem; the animal studies Gerson referred to were made in Rome (e.g.RKDimages 289864).

8 [Gerson 1942/1983] Copies of 1812-1813 in the National Gallery Oslo after Ruisdael paintings of the collection Von Moltke in Copenhagen. Paintings in the style of Ruisdael e.g. in Kassel and in the Thorvaldsen Museum in Copenhagen. [Van Leeuwen 2018] Dahl mainly studied the old masters from whose works he could learn techniques and ideas for rendering the different types of landscapes ̶ Jan Both and Claude Lorrain for Southern landscapes, Everdingen and Ruisdael for landscapes in 'Norwegian character', Meindert Hobbema for forest scenes, and Aert van der Neer for moonlight effects (Bang 1987, vol. 1, p. 115). For a direct copy after Hobbema: RKDimages 70314; after Jan Both: RKDimages 257482 and 289818. On Dahl and the Old Masters: Bang 1987, vol. 1, p. 28-33 and Rønberg et al. 2001, p. 20-35. The painting in Kassel Gerson mentions (Bang 1987, no. 191 (222,5 x 160,5 cm) , had been cut into six pieces in, or just after, World War II. Three fragments are back in Kassel and three are in the collection Georg Schäfer in Schweinfurt.